DEVSIM uses the control volume approach for assembling partial-differential equations (PDE’s) on the simulation mesh. DEVSIM is used to solve equations of the form:

Internally, it transforms the PDE’s into an integral form.

Equations involving the divergence operators are converted into surface integrals, while other components are integrated over the device volume.

In Fig. 4.1, 2D mesh elements are depicted. The shaded area around the center node is referred to as the node volume, and it is used for the volume integration. The lines from the center node to other nodes are referred to as edges. The flux through the edge are integrated with respect to the perpendicular bisectors (dashed lines) crossing each triangle edge. 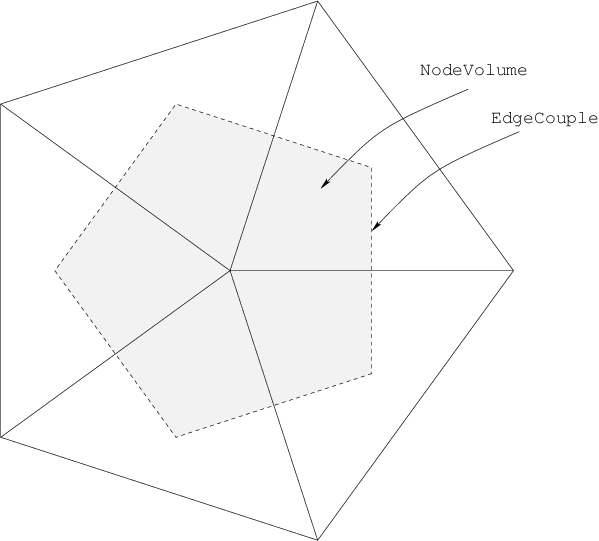 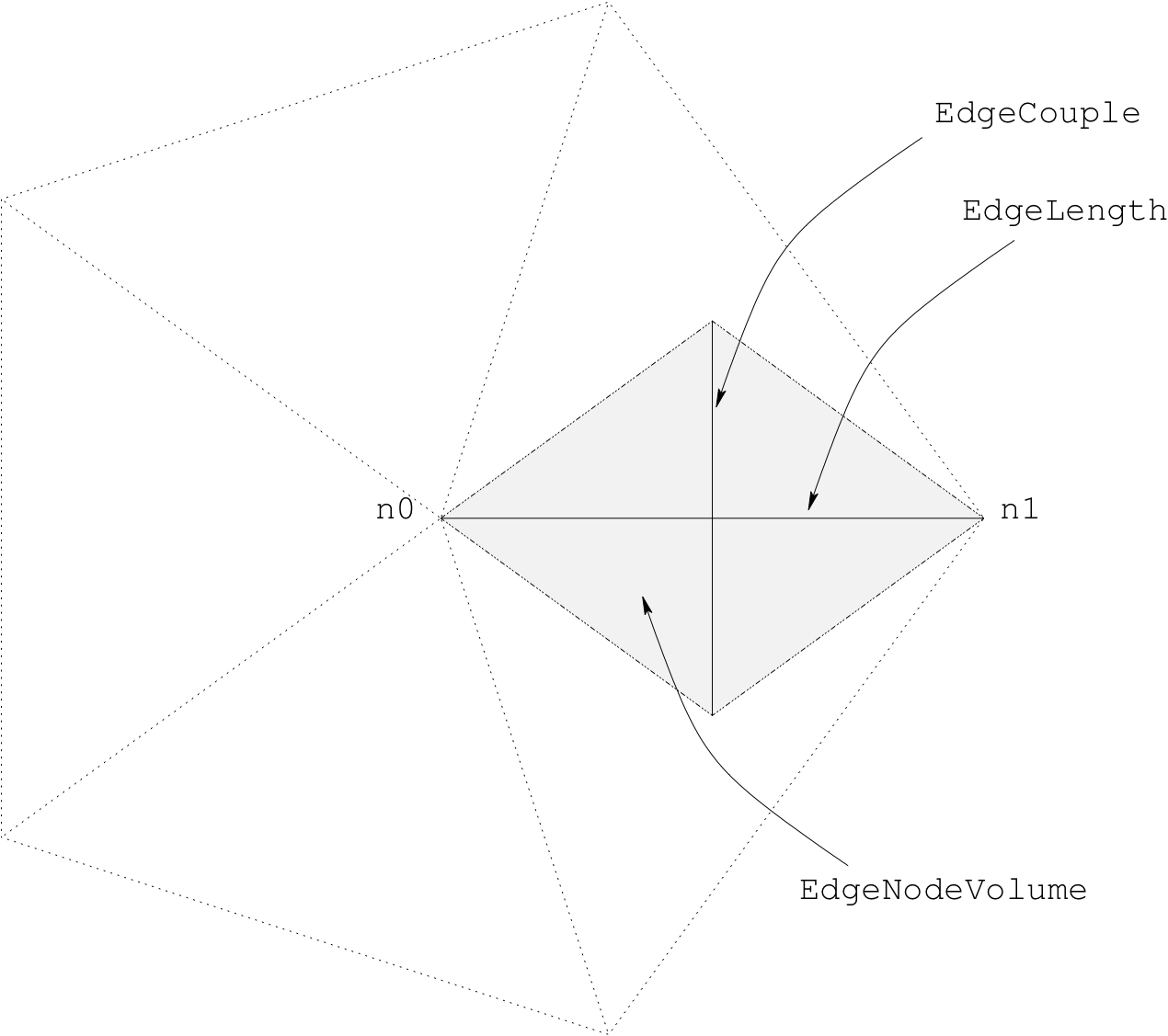 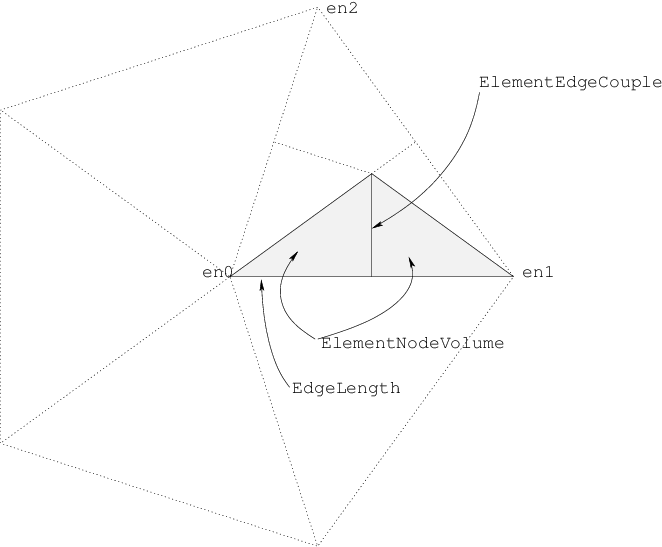 There are a default set of models created in each region upon initialization of a device, and are typically based on the geometrical attributes. These are described in the following sections. Models required for describing the device behavior are created using the equation parser described in SYMDIFF. For special situations, custom matrix assembly is also available and is discussed in Custom Matrix assembly.

Node models may be specified in terms of other node models, mathematical functions, and parameters on the device. The simplest model is the node solution, and it represents the solution variables being solved for. Node models automatically created for a region are listed in Table 4.1.

In this example, we present an implementation of Shockley Read Hall recombination [MKC02].

Edge models may be specified in terms of other edge models, mathematical functions, and parameters on the device. In addition, edge models may reference node models defined on the ends of the edge. As depicted in Fig. 4.2, edge models are with respect to the two nodes on the edge, n0 and n1.

For example, to calculate the electric field on the edges in the region, the following scheme is employed:

In this example, EdgeInverseLength is a built-in model for the inverse length between nodes on an edge. Potential@n0 and Potential@n1 is the Potential node solution on the nodes at the end of the edge. These edge quantities are created using the devsim.edge_from_node_model(). In addition, the devsim.edge_average_model() can be used to create edge models in terms of node model quantities.

Edge models automatically created for a region are listed in Table 4.2.

The devsim.edge_from_node_model() is used to create edge models referring to the nodes connecting the edge. For example, the edge models Potential@n0 and Potential@n1 refer to the Potential node model on each end of the edge.

The devsim.edge_average_model() creates an edge model which is either the arithmetic mean, geometric mean, gradient, or negative of the gradient of the node model on each edge.

In this example, we are specifying the Potential Equation in the region to consist of a flux term named PotentialEdgeFlux and to not have any node volume terms.

In addition, the solution variable coupled with this equation is Potential and it will be updated using logarithmic damping. 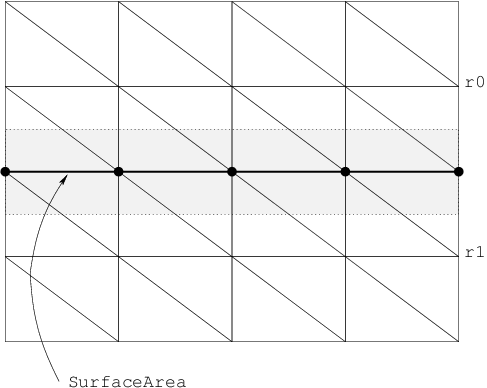 Fig. 4.4 Interface constructs in 2D. Interface node pairs are located at each \(\bullet\). The SurfaceArea model is used to integrate flux term models.¶

Fig. 4.4 depicts an interface in DEVSIM. It is a collection of overlapping nodes existing in two regions, r0 and r1.

For a given interface model, model, the derivatives with respect to the variable variable in the regions are

There are three types of interface equations considered in DEVSIM. They are both activated using the devsim.interface_equation().

In the first form, continuous, the equations for the nodes on both sides of the interface are integrated with respect to their volumes and added into the same equation. An additional equation is then specified to relate the variables on both sides. In this example, continuity in the potential solution across the interface is enforced, using the continuousPotential model defined in the previous section.

In the second form, fluxterm, a flux term is integrated over the surface area of the interface and added to the first region, and subtracted from the second. 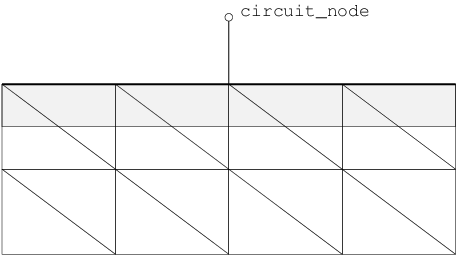 Fig. 4.5 depicts how a contact is treated in a simulation. It is a collection of nodes on a region. During assembly, the specified models form an equation, which replaces the equation applied to these nodes for a bulk node.

The derivatives are equivalent to the discussion in Model derivatives. If external circuit boundary conditions are being used, the model model derivative with respect to the circuit node node name should be specified as model:node.

During a transient, small-signal or ac simulation, the time derivative is taken so that the net current into a circuit node is

The devsim.custom_equation() command is used to register callbacks to be called during matrix and right hand side assembly. The Python procedure should expect to receive two arguments and return two lists and a boolean value. For example a procedure named myassemble registered with

where what may be passed as one of

and timemode may be passed as one of

The matrix and right hand side entries should be scaled by the NodeVolume if they are assembled into locations in a device region as volume integration.

In 2D, models representing the edge couples, surface areas and node volumes may be generated using the following commands:

In order to change the integration from the default models to cylindrical models, the following parameters may be set